We've been selling suppressors like they are going out of style lately. It's a beautiful thing. Everyone that shoots, should shoot suppressed. A lot of our customers agree! However, many of them run into a problem when they purchase a suppressor: None of their rifles are threaded to accept them! Some of them don't mind this, because it gives them an excuse to buy a new rifle. Others often buy something new, but would also like to use that new suppressor on some of their current rifles and handguns. Happily, I can tell them not to worry, we've got one of the best riflesmith's in the business not 40 minutes from Huron! Travis has been doing my rifle work for the last several years now, and you all know how picky I am when it comes to gear! In this article you'll see a tiny glimpse of why you need to get your rifle work done with Travis Stevens at TS Customs.

So I show up at Travis's shop with about 6 rifles in my hands. It literally takes 3 trips to the truck to get the rifles and all the accessories into the shop. The order of the day? Barrel threading! Obviously in order for that suppressor to be of any use, it must be appropriately attached to the end of the barrel. Travis is just the guy for that job. This particular trip, I've got a whole mess of 22LR barrels that need 1/2x28 threads to accept the plethora of suppressors the customers have ordered.

First up is a Savage Mark II TR 22lr. From the factory it has a 22" fluted barrel. This obviously is very long, so we'll need to cut it down to 16.5" for a much better handling rifle. First, the rifle is disassembled to allow the barreled action to go into the lathe. All parts for each customers rifle are kept neatly separated in little bins. 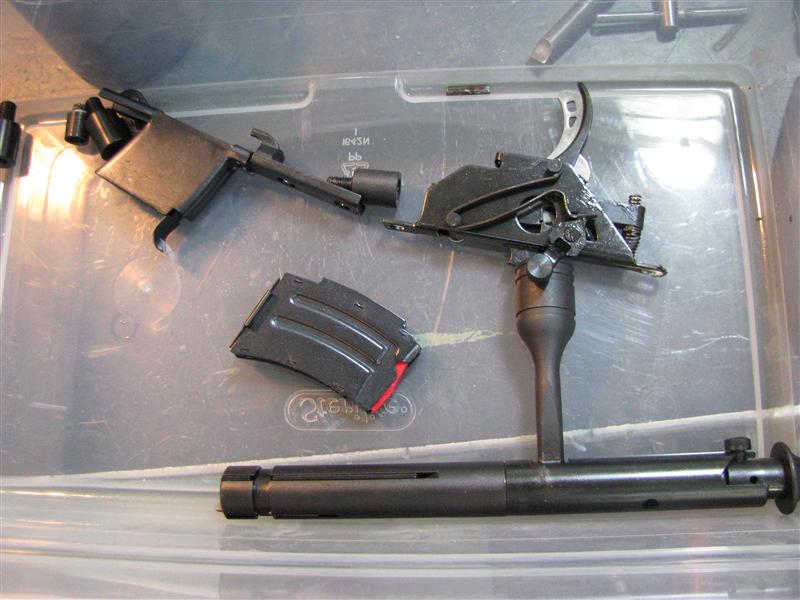 Into the lathe! The barrel is measured to the point where the cutting will happen, and then the lathe is used to cut the excess barrel off. 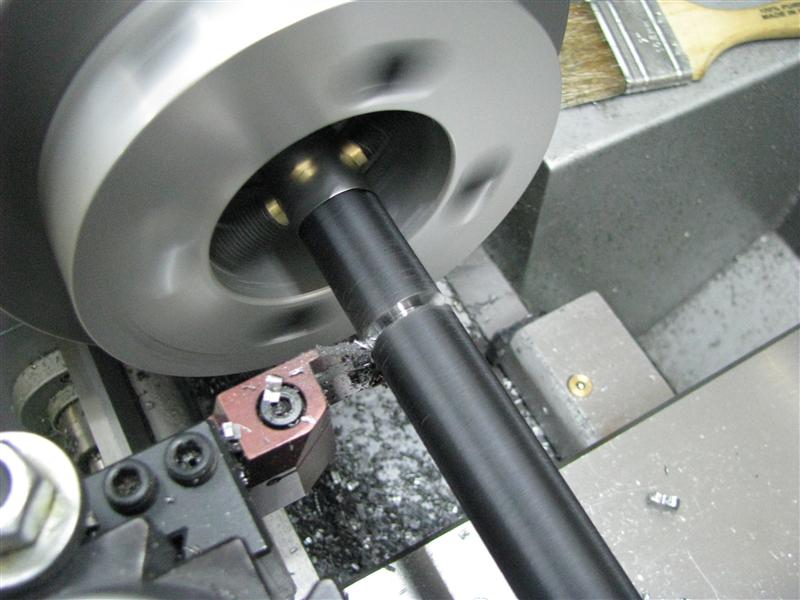 While that's going on, I'm drawn to a wall in his shop, where hangs a pile of custom rifles and a collection of ridiculous trophies. Travis isn't just some machinist, playing gunsmith. He's a shooter, that loves rifles and knows how to shoot them, whom consequently is also very good at machining. That's a solid recipe for a good gunsmith! I've seen good machinists that make shitty gunsmiths. You need to have a passion for precision rifles to truly do it right. 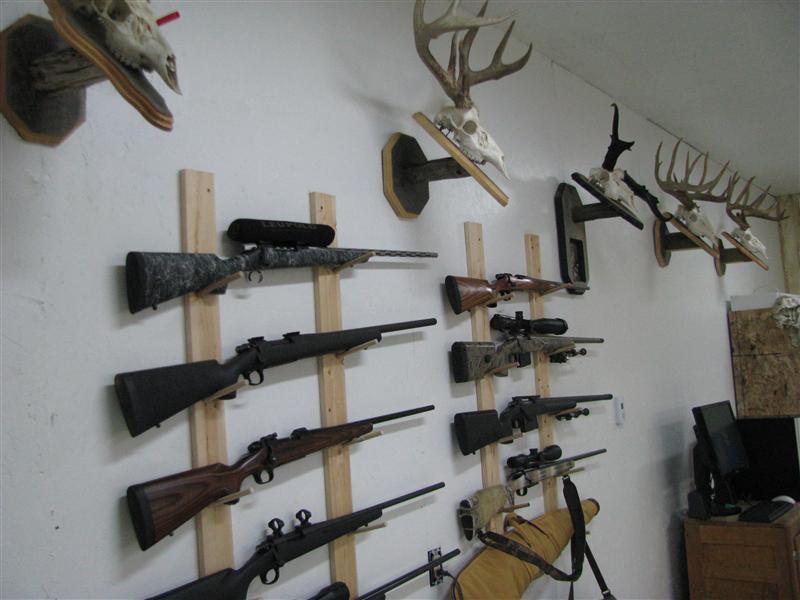 After the excess barrel is cut off, we need to find the center of that bore. A proper thread job MUST be cut concentric to the bore in order to produce minimal shift, and ensure the bullet will pass safely through the suppressor baffles. Travis holds a tolerance of 2-3 ten thousandths, 5 inches from the muzzle, when indicating the center of the bore. It's a time consuming process getting the barrel lined up properly to ensure the bore is spinning true. Be sure to watch the video, as I get some footage of the end result of that tuning. 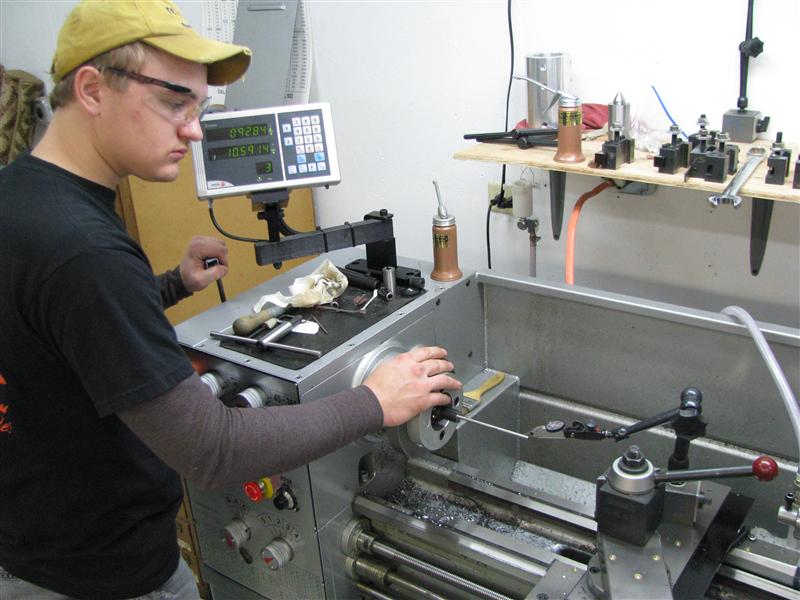 Once the bore is centered and spinning true, it's time to start turning down the OD of the barrel. Obviously a 1/2x28 thread spec calls for a half inch OD, with 28 threads per inch. 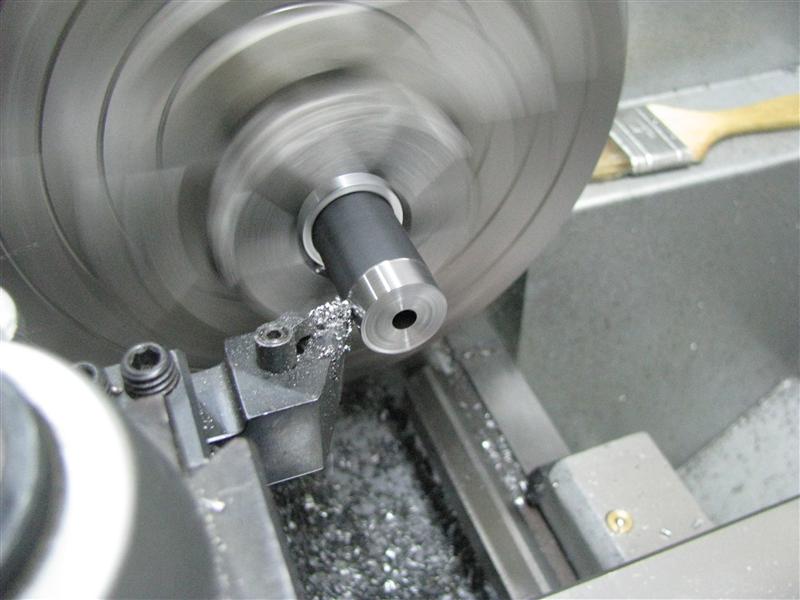 Once the OD is set, threads get cut, crown gets cut, and the spec is checked. 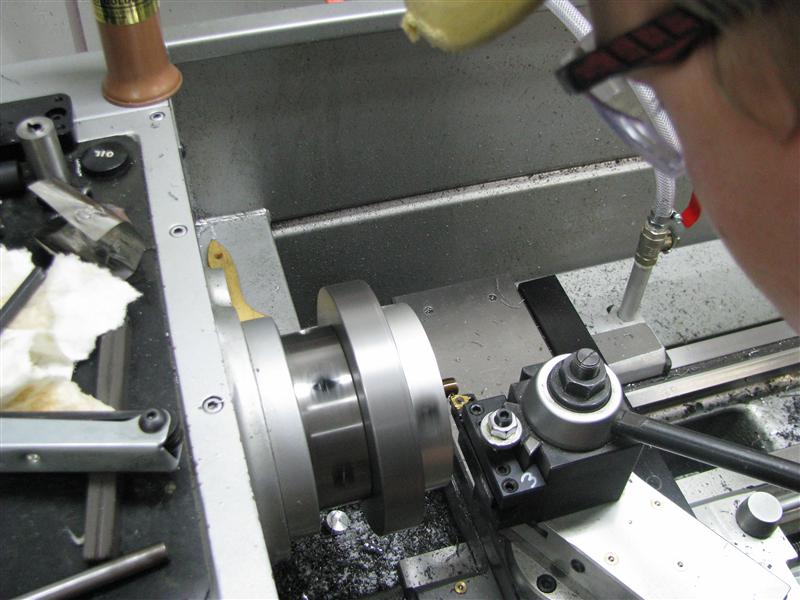 Here you can see Travis checking the thread class to ensure that it falls within class 3 specifications. It's one thing to cut a 1/2x28 thread. It's another thing entirely to cut a correct class to ensure proper fitment on most suppressors! If the threads are sloppy, you'll get a lot of carbon pushing into the threads while firing. This will result in a stuck suppressor and a lot of cussing later on. 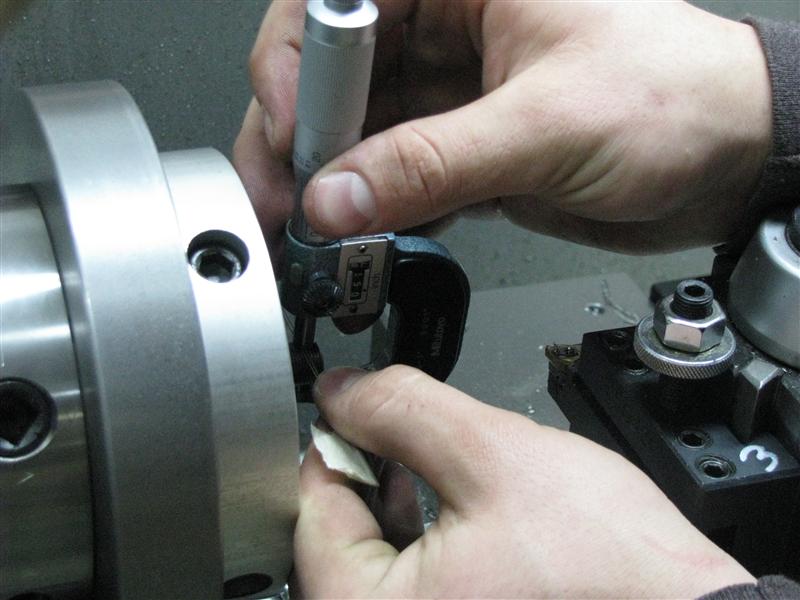 Once the spec is checked, the threads are ready to accept a muzzle device! Travis will provide a great looking thread protector to match your barrel upon request. 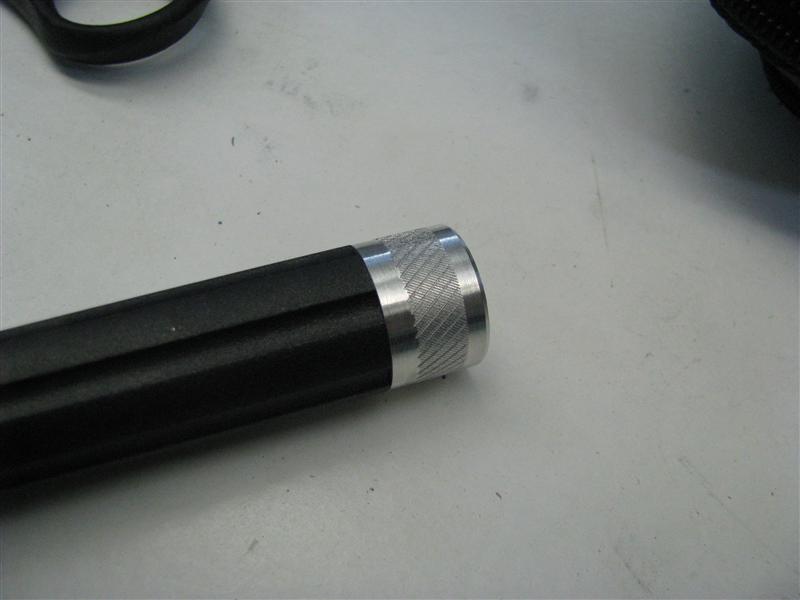 On the top you can see a factory length TR, with the 16" newly threaded one right below it. Much more handy! 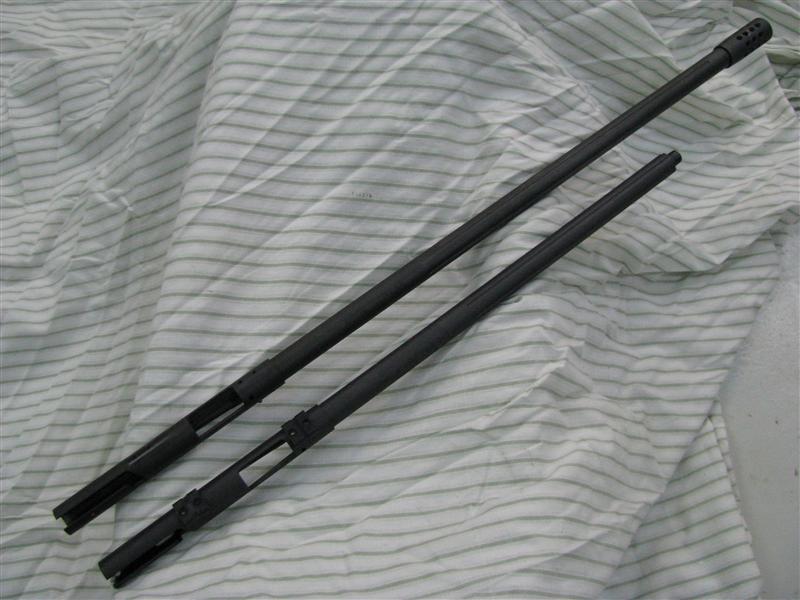 Take a look at this. We were cutting threads on a Ruger 77/22, so while Travis was cutting, I was looking over the action. I put some grease on the lugs and locked up the bolt just to check how the lug interface looked. What I found was very disappointing. Granted, this is just a 22lr, but still... ruger should be ashamed of themselves for letting a rifle like this out the door. One lug has full contact, while the other barely has 1/4 contact. Not to mention the huge gouges in the bolt that look like some mongoloid attacked the lugs with a hand file. For a $650 rifle, this is completely unacceptable. Hopefully this rifle shoots, or else it might take some machine time to get it right. Ruger's quality has really been dropping in the last few years. Pretty disappointing to see. The 77/22 action needs to be updated to really be competitive in today's market. The magazine release needs to be integrated into a hanger that is attached to the action. This will allow for more stock options and a 10x easier bed job. Then they need to ditch that ridiculous proprietary mounting system and give us a round top or an integrated picatinny rail. Those two design changes would put the 77/22 at the top of its class in a repeating bolt-action 22lr. 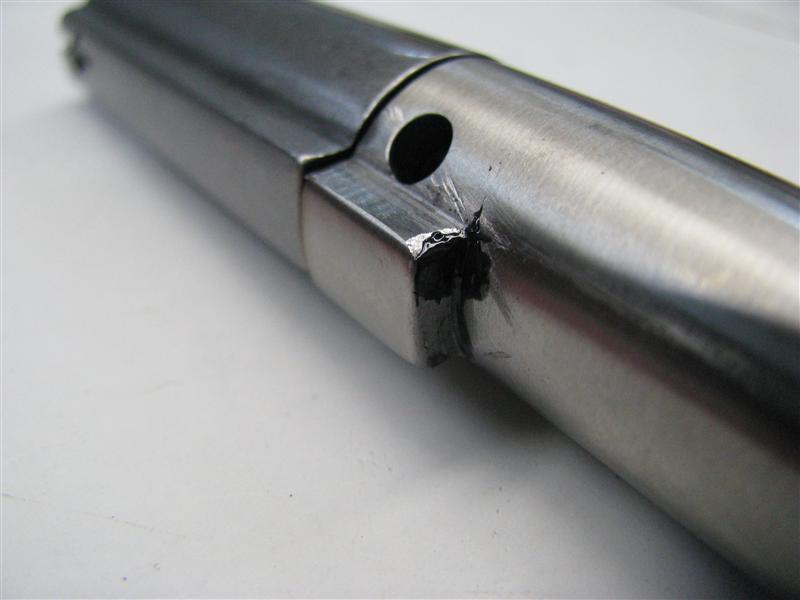 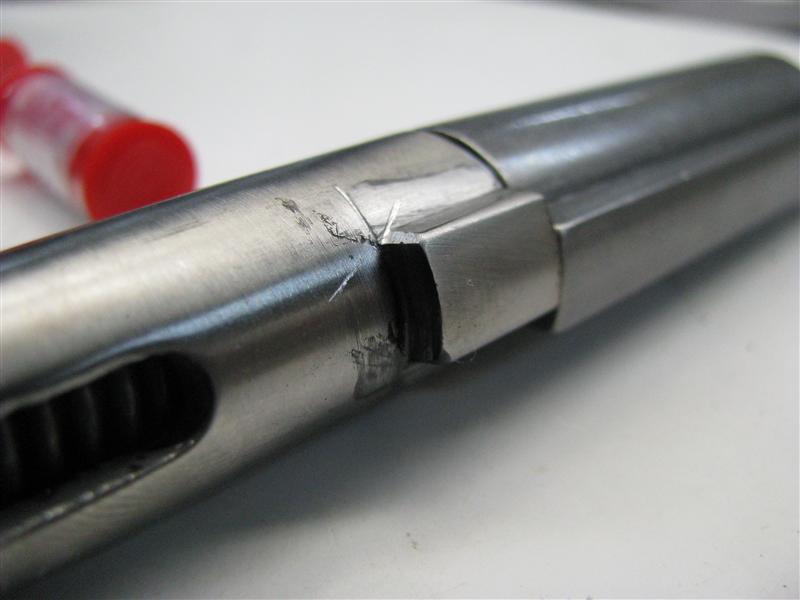 Travis is like a robot once he gets going on that lathe. He spent the next few hours cutting away on barrels, while I was just barely able to keep up with diss-assembly and assembly. Be sure to watch the video if you want to learn a thing or two about the threading process.  If you need some work done, feel free to give Travis @ TS Customs a call to talk about it. 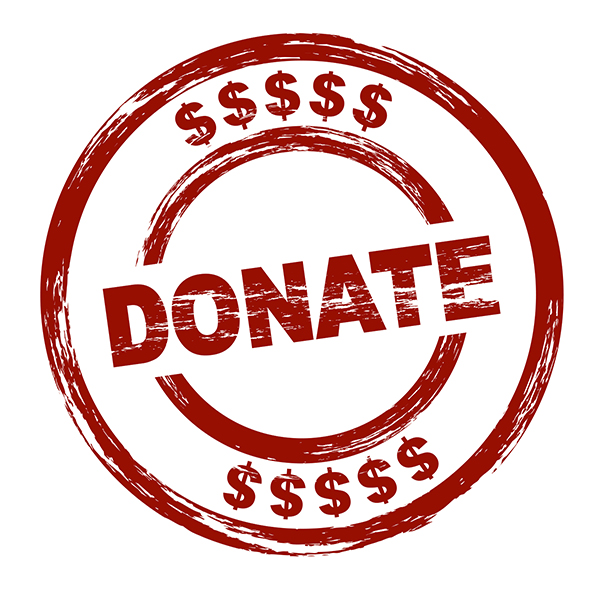